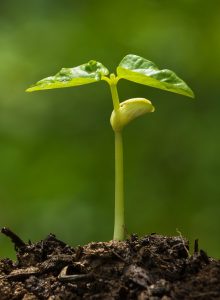 Once upon a time there was a Seed, which after a long time of struggle and patience, finally gave birth to a new plant. That plant was too delicate and small, so the seed nourished it with everything it had got. It also protected it from every danger and threat. Then, through the continuous nourishment and protection for the eternity of time, that seed finally grew into a plant with its leaves facing the sky and roots into the ground. While growing into a plant, that seed sacrificed its own existence and transformed itself into that plant.

Then, with time, that plant kept on growing both upward and downward. Its stem got wider and stronger. Its branches also got enlarged and began to spread out. After a long, long time, that plant finally turned into a mature tree. When it reached its maximum maturity and growth, something unnatural started to happen on it.

Actually, when the plant was growing into a tree, all of its parts like branches, sub-branches and leaves weren’t identical. In fact, some of them had received more sunlight than others. Some of them had received more winds than others. Some of them were simply outrun by others and had ended up being smaller and weaker. Therefore, there were some larger and stronger branches and also some shorter and weaker ones too.

But when the tree reached its peak maturity, there rose one particular branch at the top of it, which soon became the strongest and shortly, even largest. Although that branch became largest and strongest of all, it just kept on living in harmony and co-ordination with all other branches and the entire tree itself. It was just perfect. The tree was on its optimum level and everything was going smoothly as it was supposed to be, in a natural cycle. Perhaps, that topmost branch could’ve even touched the sky, fulfilling the purpose of that little seed.

Then, out of nowhere, that same branch grew some more sub-branches and with that, some more leaves too. Similar to the rest of the branches, this topmost branch also grew sub-branches and leaves with different attributes. Based on the amount and angle of Sunlight, Moonlight and wind they faced, their color and inclination began to vary. Naturally, nutrients couldn’t always be distributed equally to each and every parts of the tree, so some achieved greater development and some less. Although the topmost branch evolved at last and all of its sub-branches and leaves looked alike externally, they shortly became most diversified and then divided, even more quickly.

That same diversity-turned-into-division later grew as a cancer throughout the tree, threatening the tree to its roots. Some of the sub-branches and leaves eventually began to dominate their weaker or smaller counterparts. Almost equally large and strong ones started to struggle with each other just to prove who was better and worthy. Soon enough, everything from leaves to leaflets to sub-branches were in some kind of conflict with one another. They didn’t just fight for their development and growth. But they also started to fight over their colors, their inclinations, their classes, and also their positions on their parent branch or the tree.

For the sake of being greater or righteous, they didn’t just fought and killed each other, but they simultaneously also destroyed other branches and leaves on those branches too. And they didn’t stop just there, they got deeper into the roots with the illusive ambition of changing things from root so that they can have the entire tree serving themselves only. And some of them even got close enough to succeed on their evil ambition, but there suddenly evolved another type of cancer as a consequence of the earlier cancer. Not that the new cancer did anything good for the tree, but it did challenge and engage the earlier one, and the tree conceived yet another fight, as if it hadn’t had enough.

No matter who got into the war and whom among them won or lost, it was always the entire tree which lost. With every war fought, there were nothing but fallen leaves and broken branches. At the end of every fight, it didn’t eliminate the differences among those leaves or sub-branches, but rather it just kept stripping the tree and led to its demise. For the even more suffering of the tree, it didn’t just lose the conflicting and unwise body parts, but far more than that, it kept losing the innocent and healthy ones. And along with that pain of losing its children, the tree also felt ashamed of not being able to fulfill the purpose and dream of the seed that gave birth to it.

Till now, no one knows whether that tree just ended like that or something miraculous happened and changed its fate to a worthy completion. A leaf which narrated this story just wished it was the second one.

Connect with me on: